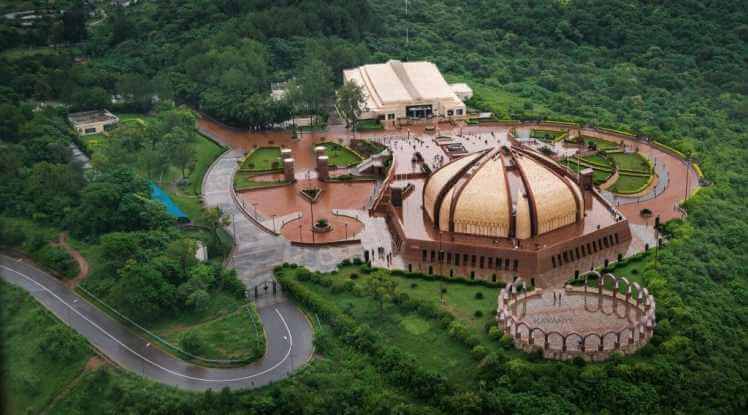 Here we have a list of top 10 best places to visit in Islamabad for all the tourists to visit.

The very first place to visit in Islamabad is The Pakistan Monument. The Pakistan Monument stands upright as a petal-closed flower in the Shakarparian forest-covered hills above the city, arching its pointed granite blocks together towards the sky like sports players embrace each other before a game. This harmonious convergence represents Pakistan’s unification and unity as a nation.

The patriotic monument, which is built on top of a marble patio foundation, provides a stunning bird’s-eye perspective of the capital. A magnificent wax statue exhibit depicts the country’s arduous journey to independence and the birth of a new nation at the national monument.

Museum is one of the best places for tourists to visit in Islamabad. The LokVirsa museum, which means “place of people’s legacy,” is a wonderful display that illustrates the distinct culture of Pakistani people. It is located five minutes on foot from the Pakistani monument. The museum, which works in partnership with UNESCO, owes its excellent care and well-preserved objects to the organization’s donations.

The museum takes you on a lovely tour through an outside garden while taking you through nine galleries of Buddhist and Sufi shrines dating back to antiquity, displaying pieces of ceramics, art, musical instruments, religious figures, and architectural remains.

The desert-tented mosque, which spreads over a surface area of 5000 square metres and is recognised as one of Islamabad’s most distinctive landmarks in travel photography, houses one of Islam’s most sacred places of worship. From every vantage point across the city, the sacred temple, flanked by four high spires on each corner, stands like a lighted beacon.

The modern-looking wonder sits at the base of the Margalla hills and can accommodate a quarter million worshippers. In the prayer room, which can hold over 10,000 people, intricately carved mosaics of marble and glass in triangular patterns hang from the tented ceiling. The main lecture hall, as well as a library, restaurant, and cafe, are all located near the prayer room.

Here we have another place to visit in Islamabad. Saidpur village is a terrific spot to see true country life in a 21st century metropolis if you’re searching for a rustic, down-to-earth escape from Islamabad’s flashy malls and teeming bazaars. A Hindu temple and a Sikh gurdwara can be seen while wandering around the square-roofed town in a ravine of the Margalla hills.

Feel free to wander the laid-back gravelly streets as children run around greeting you and residents playing sitaars take in the town’s simple and traditional way of life.

While gazing over the Himalayan foothills, high-end eateries such as Des Pardes and DeraPakhtoon will serve you hot dishes of spicy chicken masala.

The Margalla range, which leads up to the Himalaya mountains, is visible near Islamabad and is frequently visited by vista-seeking aficionados.

Some of the range’s plentiful species, such as the Rhesus macaque monkey and the Asian Paradise flycatcher, a rare and exotic bird with a long light-greyish tail, can be seen when hiking up the paths.

Daman-e-Koh, which translates to “foot hills” in old Persian, is a stunning vista point in the Margalla hills with a panoramic view of Islamabad and the picturesque Faisal Mosque on the horizon.

The Korang river flows down from the Margalla hills and into the Rawal lake, a picturesque reservoir in Islamabad’s Malpur village subdivision. Gardens with picnic areas under leafy woods and calm walkways to saunter with loved ones are interlaced throughout its perimeter. Paddle and motor boats are fantastic pastimes for families and friends on the lake.

This high-quality and reasonably priced restaurant in Daman-e-Kohpark specialised in chicken and rice meals ranging from chicken Seekh kebabs to Biryani South Asian rice. The restaurant is the number one eating-out joint in Islamabad, according to TripAdvisor, and the view of the city is unbeatable.

If you want to stay in Islamabad for a while and want to get some rest and relaxation, being a member of the stylish Islamabad club is a peaceful way to enjoy leisure activities like swimming, tennis, and reading literature.

The club, which is regarded as one of the most exclusive hangout locations for ministries of government officials and foreign diplomats, offers a fusion style buffet of world food as well as magnificent hotel-like rooms.

This circular grocery complex, known as a popular hangout location for teenagers and fashionistas, offers a variety of international foods, cafes, hole-in-the-wall eateries, and music stores.

Last but not least, shopping in the Sunday market is one of the many things to do in Islamabad. The market, which is brimming with cheap second-hand goods, fresh fruits and vegetables, and miscellaneous items, is open on Sundays, Tuesdays, and Fridays.

Islamabad is a beautiful city with a wide range of intriguing locations to explore and delicious food to sample, and a trip to Pakistan’s heartland will leave you with many wonderful memories.